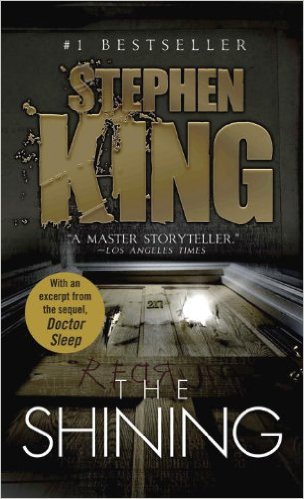 Stephen King’s The Shining is a dazzling, complex haunted house/ghost story. Maybe even the best ghost story ever written. Unlike previous ghost stories we have read in this course, there really are very compelling reasons for the hapless Torrance family to stay – financial ruin for all of them, and a probable slide back into alcoholism for Jack. So, unlike in The Haunting of Hill House, or Hell House (where the money being offered to stay is more like icing on the cake for those characters), the Torrance family doesn’t enter through the doors of the Overlook Hotel with a lighthearted sense of adventure, or a deep-seated grudge against academia. They are, quite literally, at the cliff’s edge with few options. Because of that, and because a lot of us have likely been at the edge of that very same cliff, we feel for them. We identify with them, and their very human struggles to hang on.

The story starts with a disgraced, former prep-school teacher, Jack Torrance, enduring a humiliating job interview for the position of winter caretaker at a prominent Rocky Mountain hotel. Oh, and did we mention – he just gave up drinking, and his writing career is in free fall. But, he has been given this one, last chance to redeem himself by his old, ex-drinking buddy. His old, rich, ex-drinking buddy – just take care of my famous, expensive hotel for the winter, and when spring comes, ta-da! We’ll get them to give you your old job back. Near-disaster averted. You and your family safe and sound, back in Vermont. It sounds like a great deal (and certainly any deal would sound like a good deal to Jack by this point), but he’s bitter, and resentful, and angry, and dying for a drink.

Jack gets the job and packs his wife, Wendy, and his precocious son, Danny, into the world’s most beat-up VW bug and heads into the mountains. They arrive on Closing Day, the last day of the Summer season, and meet one of my favorite characters – Dick Hallorann. Ex-Army cook, now the head chef for the Overlook Hotel. He has a secret he shares with Danny Torrance – the Shining, which is what he calls precognition, the ability to see events in the future. Before Dick leaves for his winter gig in Florida, he has a little chat with Danny and makes one of the most astonishing promises in all of fiction – If Danny ever needs him, he should just “shout” at him psychically, and Dick will come running. It is to Hallorann’s great credit that he does just that.

Alongside great good, there is also great evil here. The Overlook is a bitter, old whore, full of mean tricks and devious games. All the murders and suicides it’s seen, and maybe even facilitated, have given it a taste for human blood. It starts working on Jack right away, kind of like tenderizing a piece of meat before putting it on the grill. It really wants Danny (all that wonderful psychic power), but he is too strong for the direct approach. Wendy Torrance is barely considered as a possible conduit to Danny, presumably because it knew “Wendy would pour a can of gasoline over herself and strike a match before hurting Danny” (King 244). Jack’s father-son bond is apparently not quite as strong, at least as far as the Overlook is concerned.

Which brings me to my main complaint about this novel. As great as I think The Shining is, it is not perfect by any means. King’s prose would probably have a hard time getting by a conscientious editor nowadays. Like the infamous hedge animals, he could “use a trim”. Jack Torrance, the presumed protagonist, is an asshole trying very hard to imitate a good guy. Wendy Torrance is one of the worst dishrags of the Twentieth Century (and Shelly Duvall’s portrayal of her in the movie made her even more annoying, if that is possible). King’s female characters suffered mightily during the Sexist Seventies, with the low point occurring in ‘Salem’s Lot when grown woman Susan Norton (the protagonist, Ben Mears’, love interest) is reduced to taking orders from Mark Petrie, age 12.

Despite these flaws, I continue to enjoy The Shining. Stephen King’s grasp of premise, setting, pacing and, yes, even characterization, are spot-on. I love Danny, I understand Jack, and I commiserate with Wendy. Besides, which of us flawed neurotics would fare any better than Jack Torrance in the same situation? (Which makes me wonder – does the real-life counterpart of The Overlook Hotel, the Stanley Hotel, also close for the winter? And also hire a caretaker…?) Food for thought.

4 thoughts on “BOOK REVIEW: The Shining, By Stephen King”

This site uses Akismet to reduce spam. Learn how your comment data is processed.

Advice from an Editor's Desk

Musings and books from a grunty overthinker

Horror, action and exploitation movies that aren't really awful at all.

Tell your ghost story. Read some of mine.